Be Creative • Be Bold • Be Inspiring

Norwegian Trolls and the Halvorsens

Posted on September 6, 2015 By halvogirl 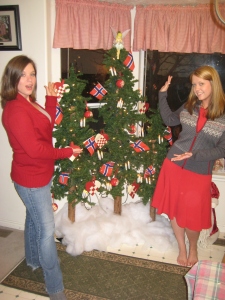 KellieAnn and sister Erica show off their Norwegian Christmas trees.

My ancestors came from the cold Scandinavian country of Norway, but it wasn’t until a family visit to Walt Disney World’s Epcot, some 4515 miles away from the actual country, that we really started to discover our Norwegian roots. Because of the Norway pavilion at Epcot, some of my first impressions of what is important to Norway were vikings, trolls, the land and the sea. But over the years our family has taken a special interest in trolls.

Trolls are mythical creatures of varying sizes and ugliness that live in the mountains, fjords, forests and the land. Their temperament can be mean, mischievous, or even benevolent. There are dozens of types of trolls and dozens of troll legends. From waterfall trolls, Fossegrimen, to Huldra  (a lady troll who seduced men), and common farm trolls, the Norwegian landscape seems to be dotted with trolls. 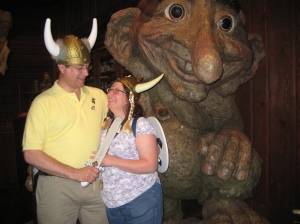 KellieAnn’s parents pose in front of a troll statue in the Norway Pavilion of Epcot.

According to the mythology, every farm has a Nisse troll. These trolls view the land as their own and sometimes can give farmers a hard time. But Nisse can be a good creature to have if a farmer keeps the Nisse happy by being kind to his own farm animals and offering gifts to the Nisse. Nisse enjoys porridge with butter, and as such a Christmas ritual developed where a farmer left a bowl of porridge and butter out for the Nisse to eat on Christmas. In the morning, the bowl is checked to make sure that the Nisse has eaten it and thus is pleased with the offering.

Around my house trolls have become the blame of problems such as spoiled milk and lost items. We imagine these creatures from our cultures’-past have followed us across the ocean to live with us in our mountain home. It might be all myth, but it is also all fun.